You can probably guess that I’m not actually writing this in Japan; in fact it’s now April, and I’m sat on the balcony of my hostel in Split. The last 2 months have disappeared in a puff of coloured smoke, so I never did get around to writing up my last two days in Tokyo. So, for your very belated reading pleasure, here goes day seven…

Almost as soon as I’d booked my flights, I looked into getting tickets for the Studio Ghibli Museum in Mitaka, just outside of Tokyo. I’d heard that the tickets would sell out almost as soon as they went on sale, so I set a reminder in my phone for the day they would be released (about 3 months in advance), and made sure to secure one. I’m a huge fan of Studio Ghibli, so I knew today was going to be a highlight of the trip.

Mitaka is a train ride out of the city, a sweet, sleepy, green suburb whose main tourist attraction is the museum. From the station there’s a shuttle bus (decorated with Ghibli characters – so cute!), or you can grab a map from the tourist information office opposite the station, for a nice walk which took me about 20mins.

You’re not allowed to take photographs inside the museum in order to preserve the magic, but I will say that it’s extremely well presented with incredible attention to detail. There’s a lot of original artwork from the films on display, and when I visited there was a fun temporary exhibition about food in Ghibli films. There’s also an exclusive short animation to watch in the museum’s cinema, a roof garden and a lovely gift shop (and more, but I don’t want to give too much away!). The only drawback for me was that the cafe didn’t have a veggie option, and the queues to eat in there were crazy.

Here’s a few snaps of the exterior of the museum: 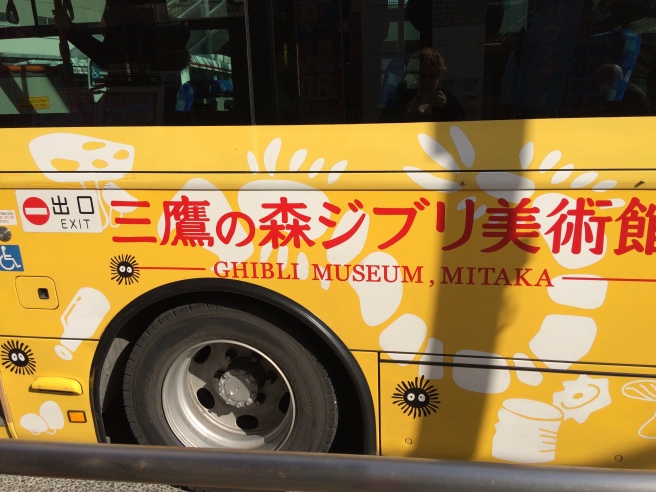 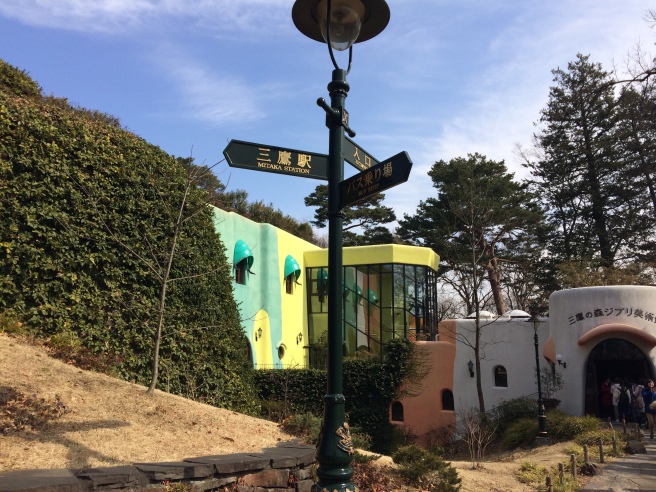 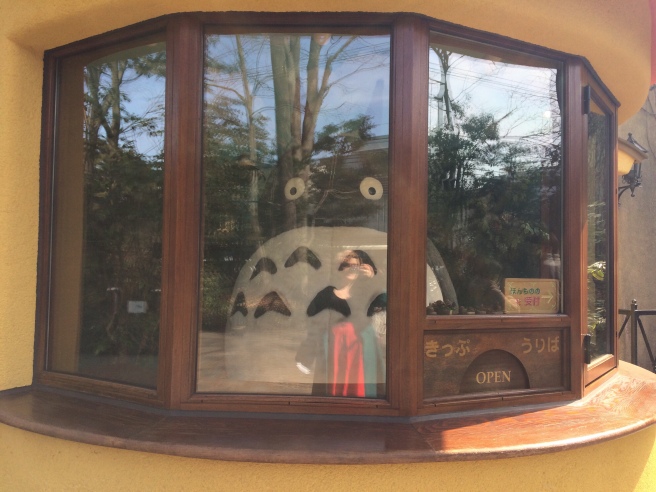 Continuing my exploration into the creative genius of Hayao Mayazaki, my next stop was the (snappily named) Edo Tokyo Outdoor Architectural Museum, in Koganei. This is pretty far off the tourist radar, and as a result it wasn’t that easy to get to, but it was absolutely worth it. It was Mayazaki’s inspiration for the spooky deserted town in ‘Spirited Away’, and he even designed the museum’s logo, a very cute little caterpillar.

The museum rescues old buildings from around Japan, and sympathetically restores them. The buildings include many houses, shops and buildings that once held business, and even a public bathhouse (sadly closed for restoration when I visited). There are volunteer guides throughout the museum, and like in the other museums I visited they were incredibly friendly, knowledgable and attentive. I’m very fond of architectural and ‘living’ museums, and this one was absolutely magical. It was such a treat to be able to step inside so many historic buildings located so close to each other, all meticulously furnished and decked out as they would have been when still being used for their original function. 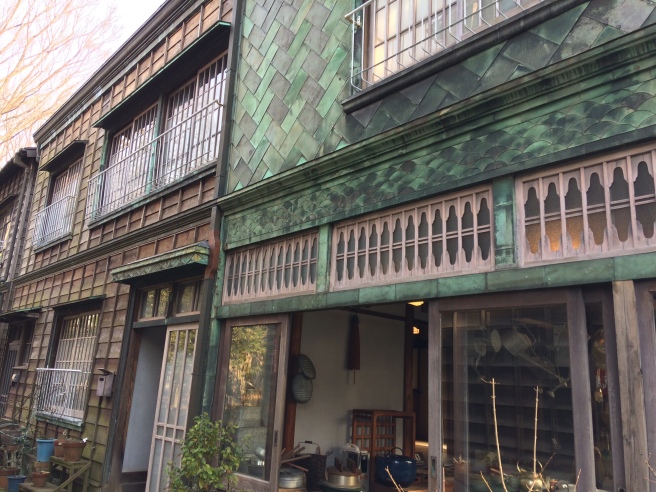 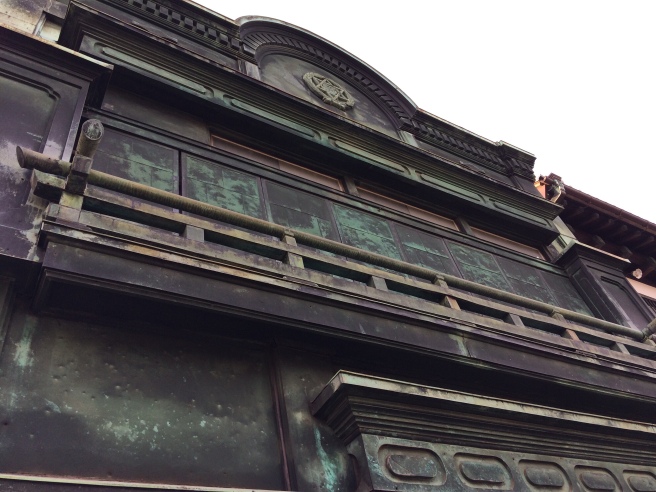 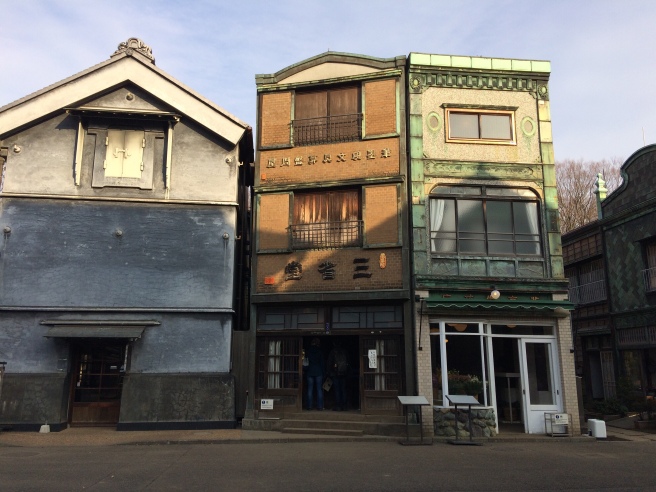 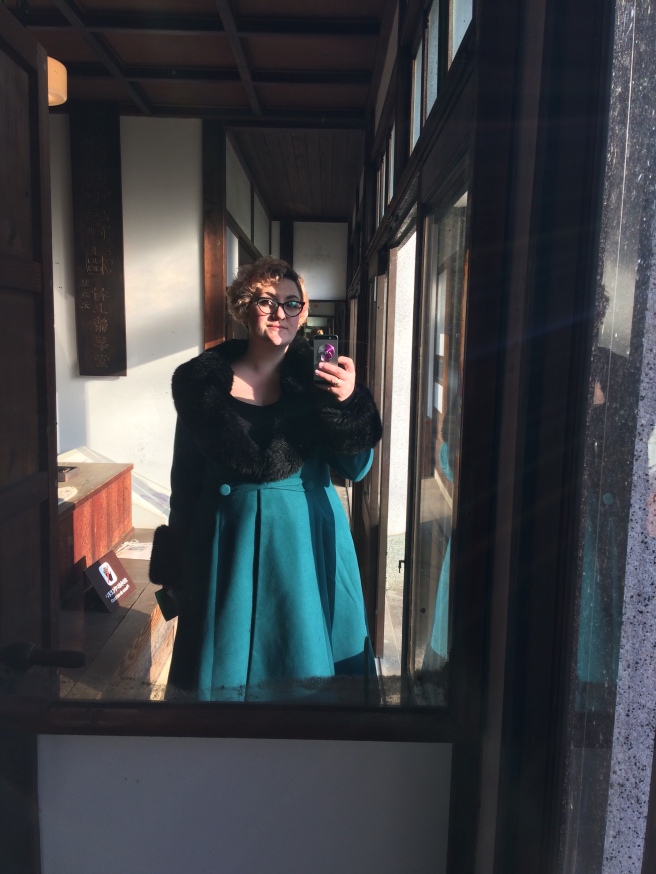 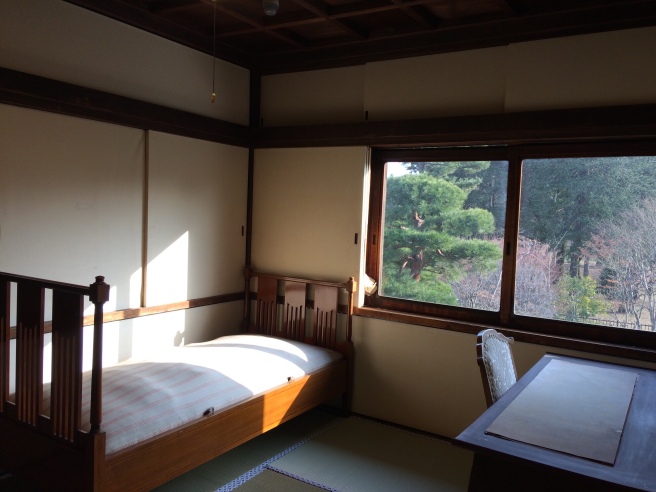 One of the funniest moments of the trip came when I went to take the bus back to the station. I couldn’t comprehend the timetable, and waited for a few minutes unsure if it was even the right stop. Luckily for me a lovely man with perfect english came along and told me that I was waiting at the wrong bus stop. He kindly walked me to the correct one, all the while telling me about his one great love in life: Welsh singer Tom Jones, whom he’d seen in concert many times. He also told me about his desire to visit the UK, partly so that he could visit Tom’s hometown of Pontypridd!

Back in the city, I took a trip up the Tokyo Metropolitan Government Building, for a quick look at Tokyo’s skyline from up high. It would have been a better experience in daylight, as the glare from the lights on the glass made it hard to see much, and impossible to take a photograph. I was pretty starving after my busy day, so I unashamedly went to a well-known North American buffet chain to enjoy their salad bar – probably the most vegetables I’d had all week! 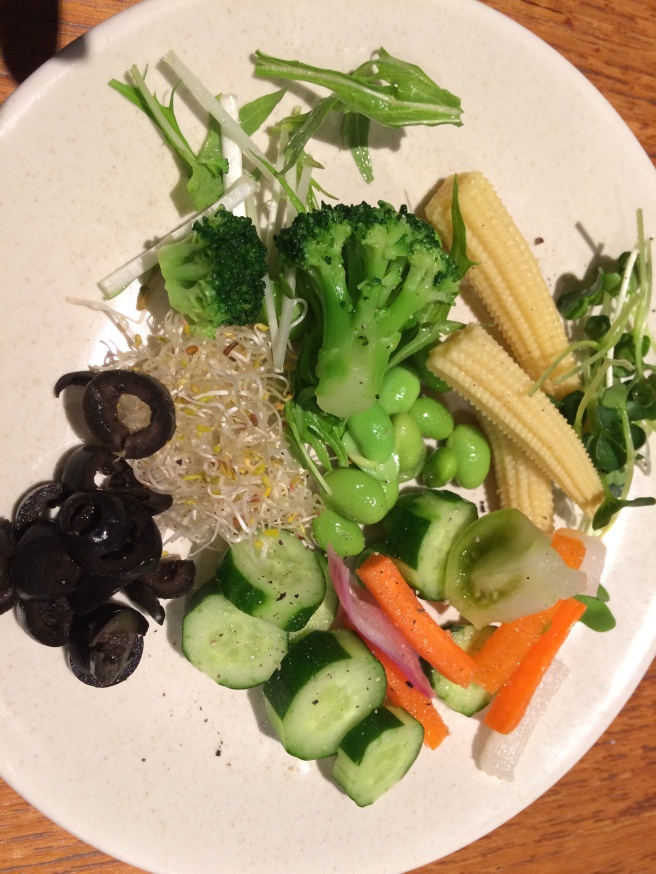 I headed back to Ginza to make a couple of last stops before I hit the hay: Itoya, Tokyo’s biggest stationary shop (spread across 2 huge buildings, one of which had 7 floors…!) and the kitkat shop. Kitkats in Japan have cult status, and flavours include green tea, maple syrup, purple sweet potato, matcha and wasabi (there are literally hundreds of flavours). They’re smaller bars than at home, and more of a luxury than we might consider them to be in the UK (I found that Japanese chocolate in general was packaged and presented in far more luxurious style, making it more of an occasion to eat than simply pulling open a foil wrapper). I had a little spree in both shops, picking up a selection of kitkats for my family to try, and some nifty pens and stationary for me, which I’ve since used to do a scrapbook for the trip.

I wish we had somewhere like Itoya in London, although given how much stationary I already own, and how dangerous a trip to muji or paperchase is for my bank balance, it’s probably best that we don’t..! 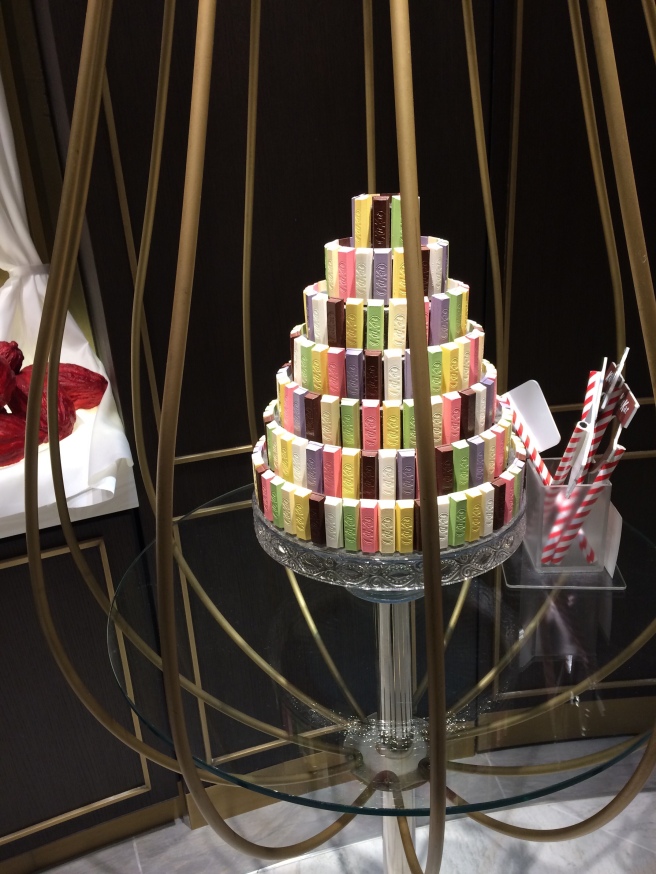 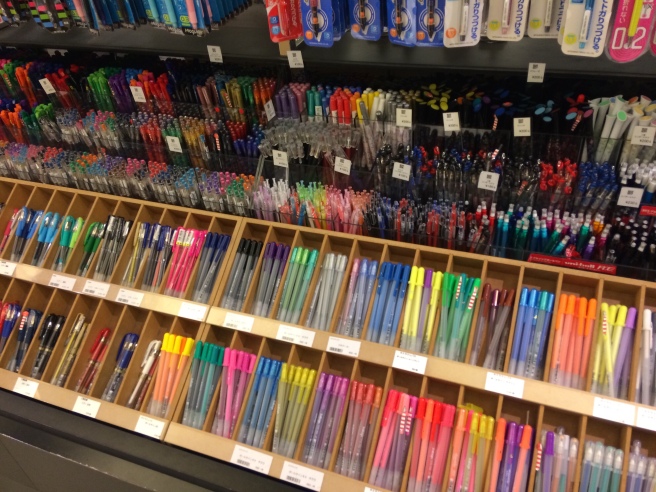 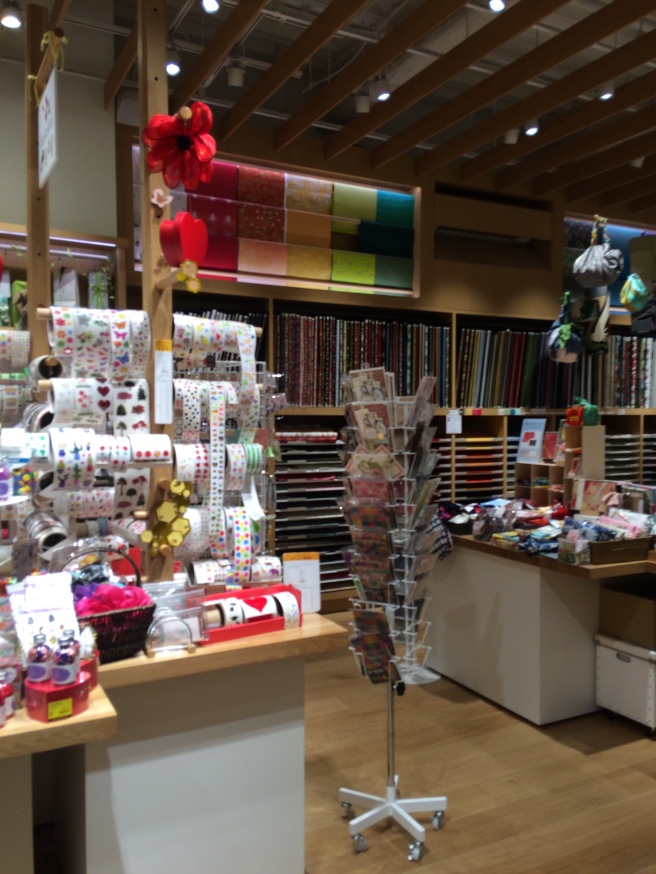 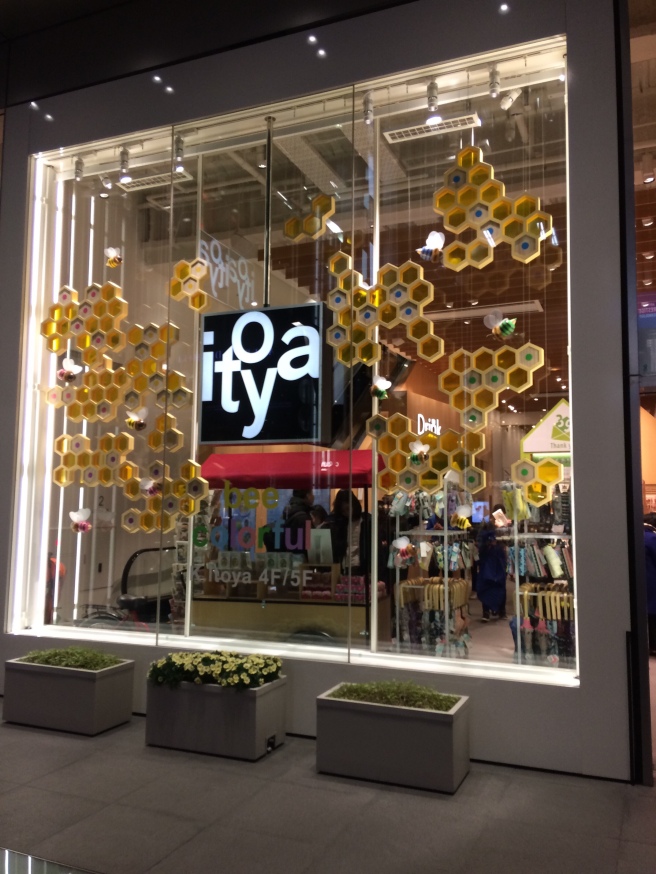 View all posts by carolinejkendall

One thought on “Tokyo Day 7 – Spirited away to a land of soot sprites.”

I’m a 32 year old adventuress living in London. This blog was set up to share a big trip I took in 2018, when I took 6 months out to explore some of the lesser visited parts of Europe and Asia. 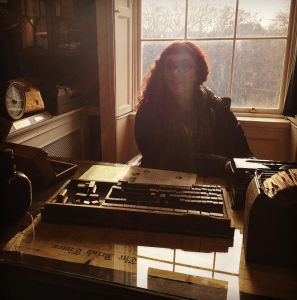